Even though LeBron started the opener at Point Guard, Rajon Rondo is a quality PG option as well, who can be used when Coach Vogel feels like the team needs to switch it up and try different rotations putting LeBron at forward.

After Thursday’s practice, Coach Vogel had this to say about his veteran point guard, “I’ve given it a lot of thought, and I think he’ll be in the starting lineup a lot,” referring to Rondo. “I definitely envision a lot of games where he’ll be the starting point guard.” Vogel stated. 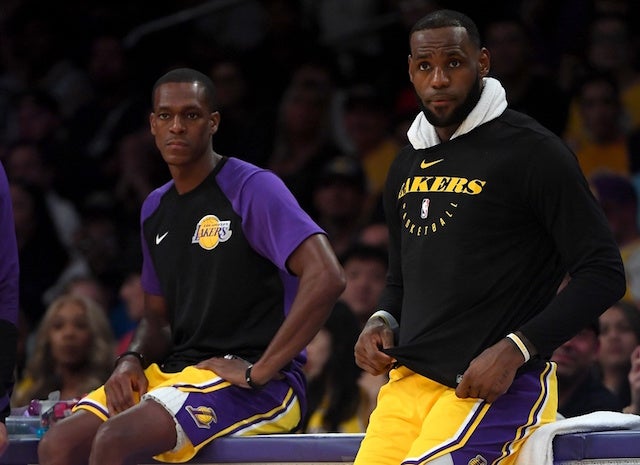 The Laker’s still must figure out exactly how much “a lot” means, Vogel went on and also said that it could mean just 10 starts for Rondo. The idea is to find matchups that make make sense for Rondo and that will help the Lakers not have to be so dependent on LeBron to set up the team.

LeBron started at PG, guards Avery Bradley and Danny Green started at the two and three, along with AD at the four and McGee at the five. The veteran point guard Rondo did not appear in the Lakers’ season-opening loss vs. the LA Clippers, sidelined with a sore calf, and the offense was sloppy. The Lakers shot 43.5 percent as a team from the field and had 14 giveaways to only 20 assists.

Rondo said he first started to feel some pain in his calf the day before the Lakers’ last preseason game vs Golden State. Rondo was able to participate during Thursday’s practice at “full speed” and “didn’t look impaired at all,” said Vogel, but his chances to play in tonight’s game against the Jazz are yet to be determined.

“He looked really good,” Vogel said. “He looked fresher than everybody else. A little bounce in his step, which is good. But, you know, it’s not how he feels today, it’s how he feels after today’s workload. Right? So we’ll see how he responds to what he’s doing today and make that decision tomorrow.”

Bradley was able to impress the coaching staff when he got to run with the starting unit during the preseason, sources told ESPN, dropping 18 points on an effective 7-for-9 shooting in the Lakers’ dominant 126-93 preseason win over the Warriors on Oct. 16. With Rondo not available, the next choice was to insert Bradley into the lineup which we may see more of, depending on how much Rondo starts at PG.

James finished with only 18 points, going a poor 7-19 from the floor. He also added 10 rebounds and 8 assists vs the Clippers. James played his worst minutes in the 4th, only making one shot on four attempts and committing 3 turnovers in the last frame.

James focused on targeting Anthony Davis in the post much of the game, something that worked for the offense but became less-effective as the game played out. With this being said, I’m more than confident that this duo will be nearly unstoppable once they learn how to play together more effectively. Plus, it was Davis’s first official game as a Laker.

“I think if there’s one thing that stands out, is when they started bringing soft help in the post, we didn’t respond to that well enough in terms of our spacing,” Vogel said about his team. “There’s simple counters, and if they’re going to sit in AD’s lap, with the shooters that we have out there, we should be shooting open 3s, if we’re spaced appropriately in those situations.”

“My preference is what coach Vogel wants me to do,” he said. “I’ll be cool with that.”

Vogel said there still could be games where Rondo comes off the bench and Bradley starts, depending on matchups.